You are here: Home1 / President 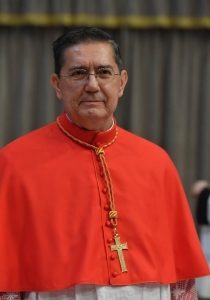 Scroll down for Speeches and Writings of the President

President of the Dicastery for Interreligious Dialogue

Cardinal Miguel Ángel Ayuso Guixot, M.C.C.J., was born on 17 June 1952 in Seville, Spain, in a large and profoundly Catholic family.

The fifth of the nine children of Juan de Dios Ayuso Rubio and Natividad Guixot Visconti, he initially attended the San Antonio Maria Claret College, and subsequently enrolled at the Faculty of Law of the city university, while continuing to attend Church and spiritual retreats for young people. It was here that he came into contact with the journal and publications of the Combonian Missionaries of the Heart of Jesus, deciding in September 1973 to enter into the Congregation in which he gave his perpetual vows on 2 May 1980. He was ordained a priest on 20 September of the same year.

Fr. Ayuso continued his ecclesiastical formation in Rome, at the Pontifical Urban University and the Pontifical Institute for Arabic and Islamic Studies (PISAI). He left in October of 1982 for Egypt, and served as a parish priest in Cairo, dedicating himself to the reception and assistance of young Sudanese Catholics present in the Egyptian capital as students, migrants or political refugees. This experience, following in the footsteps of Saint Daniele Comboni, then led him to Sudan during the time of civil war. He remained there until 2002, directing the catechetical centre of the diocese of El-Obeid – which includes territories sadly known for poverty and conflict, such as Kordofan and Darfur – and from 1989, taught Islamology in Khartoum.

In 2000 he obtained a doctorate in dogmatic theology from the University of Granada, and carried out teaching activities also in Cairo and finally in Rome, where in 2006 he became the president of the PISAI.

Appointed as consultor of the Pontifical Council for Interreligious Dialogue in 2007, the year in which Tauran was chosen as president, on 30 June 2012 he was called by Benedict XVI to serve as secretary of the dicastery.

As the health of the cardinal president deteriorated, at the beginning of 2016 Pope Francis elevated Ayuso Guixot to the titular episcopal see of Luperciana, conferring ordination on 19 March. Since then he has undertaken a succession of commitments, trips in every corner of the world to bear witness to Muslim, Hindu, Buddhist, Sikh, Shinto and Confucian brothers and sisters and those of other traditional religions that it is through personal friendship that it is possible to establish dialogue.

Bishop Ayuso Guixot was named the President of the Pontifical Council for Interreligious Dialogue on 25 May 2019, and created and proclaimed Cardinal by Pope Francis in the consistory of 5 October 2019. He is a member of the Congregations for the Oriental Churches and the Evangelization of Peoples.