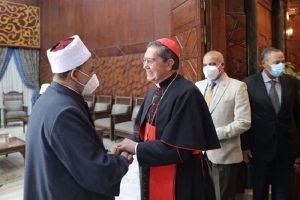 Visit to Egypt by the Cardinal President, 2-5 December 2021

Cardinal Ayuso was invited, as President of the Pontifical Council for Interreligious Dialogue, to address the students and teachers of the University of Al-Azhar, by the President of the University, Prof. Dr. Muhammad Hussein Al-Mahrasawy, who in the invitation expressed the hope that the presence of the Cardinal President will help to further strengthen the ties between the Vatican and Al-Azhar and between the different religious traditions.

Among other things, Prof. Dr. Muhammad Hussein Al-Mahrasawy and His Eminence Cardinal Ayuso Guixot are Members of the Higher Committee of Human Fraternity, established in August 2019, to implement the contents of the “Document on Human Fraternity for World Peace and Living Together,” signed in Abu Dhabi on 4 February 2019 by the Holy Father and the Grand Imam of Al-Azhar.As is well known, each year the representative of Al-Azhar and that of the Holy See alternate the Presidency of the Higher Committe. This year the President is His Eminence Cardinal Ayuso Guixot.

The visit and the Conference of His Eminence to Al-Azhar are of considerable importance, thanks also to the great importance that the Sunni institution has and also thanks to the fraternal friendship between Pope Francis and the Grand Imam Al-Azhar Ahmed Al-Tayyeb.

We recall here that Cardinal Ayuso Guixot is not the first cardinal to address the audience of Al-Azhar. There is a notable precedent—that of Cardinal Franz König, Archbishop of Vienna, back in 1965. At that time, it was not easy to imagine that a Catholic could speak and present his point of view in a Muslim context. Yet this happened, and the Cardinal, on 31 March 1965, before the promulgation of the Conciliar Decree Nostra aetate, presented the theme “Monotheism in the contemporary world”, thanks also to the sensitivity and openness to dialogue shown by the Grand Sheikh Hassan Mamoun, then responsible for Al-Azhar.

The current visit of Cardinal Ayuso Guixot is intended to be a further opportunity to build human fraternity and strengthen the importance of friendly relations with the University of Al-Azhar.

Article about the visit in L’osservatore Romano

Article about the visit in Ahram Online