Pope Francis departs from Rome’s Fiumicino airport aboard the papal plane bound for Nur-Sultan, as he begins his Apostolic Journey to Kazakhstan.

The papal plane took off from Rome’s Fiumicino airport on Tuesday at 7:36 AM with Pope Francis aboard, along with a compliment of around 80 journalists in the papal entourage.

The Pope’s 38th Apostolic Journey abroad takes him to the Nur-Sultan, the capital of Kazakhstan, where he is expected to arrive at around 5:45 PM local time (GMT+6) after a roughly 6.5-hour flight.

His first official visit comes soon afterwards on Tuesday as he makes a courtesy visit to President Kassym-Jomart Tokayev, before meeting with the country’s authorities, civil servants, and diplomatic corps. 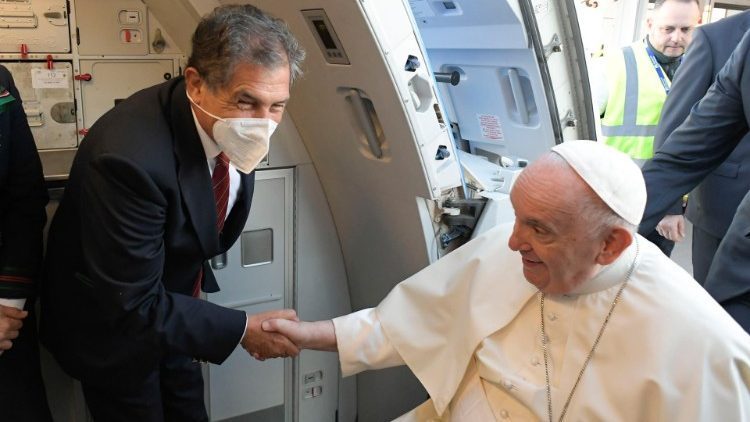 Interreligious dialogue at forefront of visit

Pope Francis visits the Central Asian nation mainly to attend the 7th Congress of Leaders of World and Traditional Religions.

He takes part in the opening session of the Congress on Tuesday morning, and will greet its participants who hail from around 100 nations.

The Pope’s presence will lift the profile of this 7th interreligious congress, according to Prof. Azza Karam, Secretary General of Religions for Peace.

“He is seen as a religious leader who articulates the moral responsibilities and even clarifies what needs to be done in order to heal communities and to prevent conflict,” says Prof. Karam. “So, his role will continue to be to map out the how and why of resolving and avoiding conflicts, including of living more peacefully with ourselves as people of faith.”

The Pope closes the two-day Congress on Wednesday afternoon with a speech following the reading of the final declaration.

Yet, the Holy Father will not fail to offer his closeness and encouragement to the Catholics of Kazakhstan.

He celebrates Holy Mass on Wednesday at the “Expo Grounds” in Nur-Sultan for the small Catholic community.

Catholics make up around 1 percent of Kazakhstan’s population of 19 million, 70 percent of which is Muslim, and 25 percent Christian, mostly Russian Orthodox.

Pope Francis also meets with the Bishops, clergy, seminarians, and men and women religious of the country on Thursday morning at the Cathedral of Our Lady of Perpetual Help.

Fr. Ruslan Rakhimberlinov, the rector of the Catholic seminary in Karaganda, says the local community feels blessed to host the Pope in their homeland.

“For us, the visit of Pope Francis to Kazakhstan is an opportunity for our small Catholic community here, our ‘small flock’ in Kazakhstan, to gain some momentum,” he says.

Pope Francis will return to Rome on Thursday evening at around 8:00 PM Rome time.