You are here: Home1 / Kazakhstan Visit2 / Pope to Civil Authorities in Kazakhstan: Harmonise with your past and ...

Pope to Civil Authorities in Kazakhstan: Harmonise with your past and present

Pope Francis meets with civil authorities in Kazakhstan and urges them to find harmony, as they do in their history and traditions, to allow peace and democracy to prevail in the country.

Pope Francis arrived in Kazakhstan on Tuesday for his 38th Apostolic Journey outside of Italy. Meeting on that same afternoon with Authorities, Civil Society, and the Diplomatic Corps in Nur-Sultan, the Pope offered a “cordial greeting” to all, before expressing his “honour” at being there as “a pilgrim of peace, seeking dialogue and unity”.

The Pope began by stressing the urgency with which our world needs peace and to “recover its harmony”. He went on to use the Kazakh traditional instrument, dombra, one of the most important symbols of the country, as an example of this. 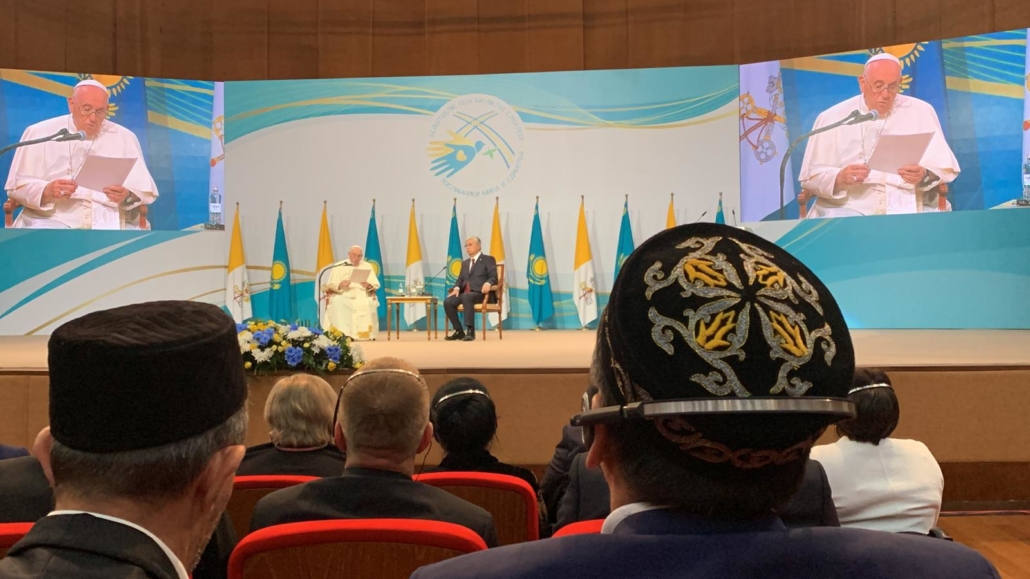 Born in the Middle Ages, the dombra has accompanied, down the centuries, the recitation of sagas and poetry linking the past to the present. “As a symbol of continuity in diversity,” Pope Francis said, “its rhythm accompanies your country’s memory; it thus serves as a reminder of how important it is, amid today’s rapid economic and social changes, not to neglect the bonds that connect us to the lives of those who have gone before us”.

The Pope noted that the memory of Kazakhstan holds “a glorious history of culture, humanity, and suffering”. He recalled the prison camps and mass deportations that occurred in the country’s history, and the fact that despite this “Kazakhs did not let themselves remain prisoners of these injustices: the memory of your seclusion led to a deep concern for inclusion”, he said.

“May the memory of the sufferings and trials you endured be an indispensable part of your journey towards the future, inspiring you to give absolute priority to human dignity, the dignity of every man and woman, and of every ethnic, social, and religious group”, said the Pope. 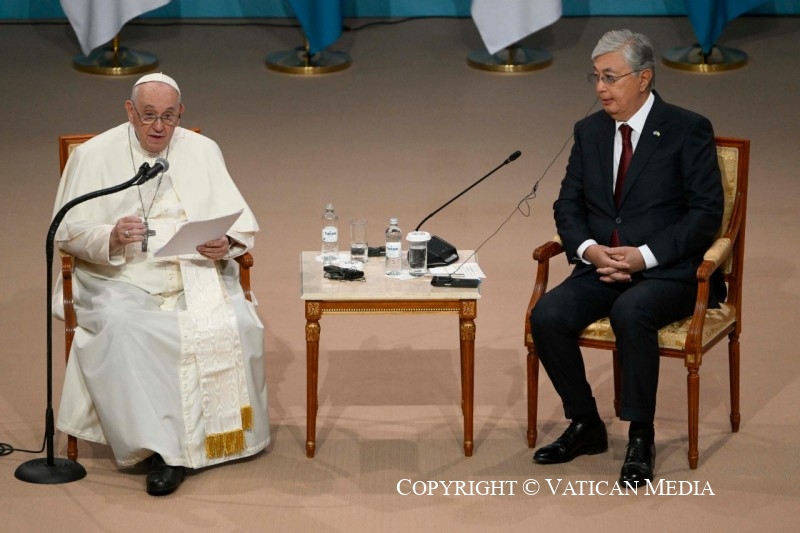 Returning to the image of the dombra, the Pope noted that it is played by plucking its two strings. The two parallel strings can symbolize the harmony between Kazakhstan’s freezing winters and scorching summers, between modern and historic cities, and “above all we can hear the ‘notes’ of two souls, Asiatic and European, which give it a permanent ‘mission of linking two continents'”. The 550 ethnic groups and the over 80 languages present in the country, with their diverse histories and cultural and religious traditions, make Kazakhstan “a unique multiethnic, multicultural, and multi-religious laboratory and disclose its particular vocation, that of being a country of encounter”.

The contribution of religions

With this in mind, the Pope stressed that his presence in the country is “to emphasize the importance and the urgency of this aspect of encounter, to which the religions are called especially to contribute”. Religious freedom represents “the best channel for civil coexistence”, he added.

The Pope went on to note that the word “Kazakh” refers to walking in freedom and independence. “In this regard”, he stressed, “I wish to express appreciation for the affirmation of the value of human life embodied by the abolition of the death penalty in the name of each human being’s right to hope”.

In recent months a process of democratization has begun in the country, “with the aim of strengthening the competencies of the Parliament and of the local authorities and, more generally, a greater distribution of power”. This is a meritorious, yet demanding process, said the Pope, and it requires persevering towards the goal without turning back.

Considering Kazakhstan’s geopolitical significance as a crossroads, “it has a fundamental role to play in lessening cases of conflict”, said the Pope. “Thinking specifically of global commitment to peace, I express deep appreciation for this country’s decisive repudiation of nuclear weapons and its efforts to develop energy and environmental policies centred on decreased dependence on carbon fuel and on investment in clean sources of energy, the importance of which was emphasized by the International Exhibition held here five years ago”. This, along with the commitment to interreligious dialogue, is a seed of hope sown in the common soil of humanity, stressed the Pope. “It is up to us to cultivate those seeds for the sake of coming generations, for the young, whose desires must be seriously considered as we make decisions affecting the present and the future”.

Bringing his discourse to a close, Pope Francis thanked all those present for their hospitality and for the opportunity granted to spend these days in fraternal dialogue with the leaders of many religions. “To you who have primary responsibility for the common good, and to all the people of the nation, I express my joy at being here and my readiness to accompany with prayer and closeness every effort being made to ensure the prosperous and harmonious future of this great country”.