You are here: Home1 / Kazakhstan Visit2 / Pope in Kazakhstan: Religions ‘key to building world peace and u...

In his address at the 7th Congress of Leaders of World and Traditional Religions in Nur-Sultan, Kazakhstan, Pope Francis underscores how religions need to grow in friendship in order to respond to the thirst for world peace and for the infinite that dwells in the heart of each of us.

The first major event on the Pope’s schedule in Kazakhstan took place on Wednesday morning in the nation’s capital of Nur-Sultan when he addressed participants at the 7th Congress of Leaders of World and Traditional Religions. 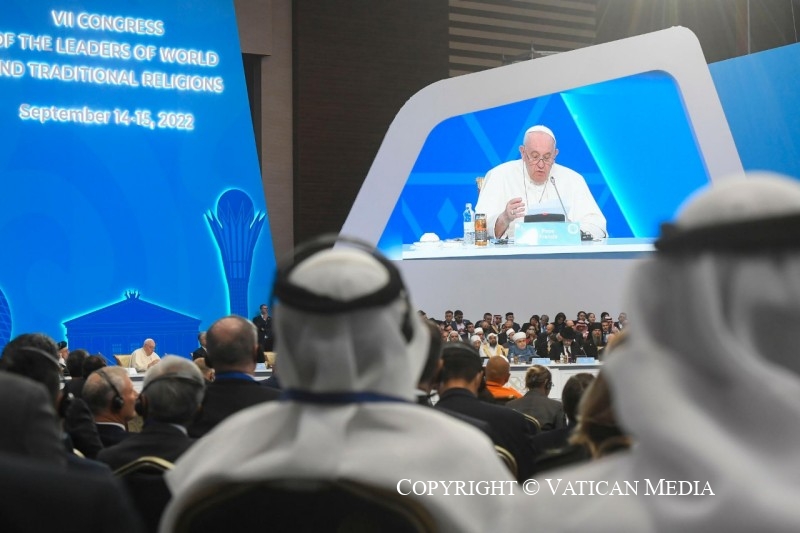 The two-day meeting, which takes place every three years, has brought together religious leaders from around the world to focus this time on how religious leaders can foster the spiritual and social development in the post-pandemic world. Over 100 delegations from 50 countries are attending the Congress, made up of religious, cultural, civil, governmental, and non-governmental representatives.

Drawn by the infinite

Pope Francis travelled to Kazakhstan to participate personally in this meeting, following the invitation of the nation’s president, Kassym-Jomart Tokayev.

In his speech to the Congress, the Pope began by addressing everyone as “brothers and sisters…in the name of the fraternity that unites us as children of the same Heaven.” He noted that “before the mystery of the infinite that transcends and attracts us, the religions remind us that we are creatures…not omnipotent…journeying towards the same heavenly goal.”
This shared nature then creates naturally “a common bond, an authentic fraternity,” said the Pope, recalling how the Central Asian nation of Kazakhstan throughout history has been a land of encounter involving ideas, faiths, and trade as in the ancient silk route.

He expressed hopes for the encounter of religions to be always based on human relationships marked by “respect, sincere dialogue, respect for the inviolable dignity of each human being, and mutual cooperation.”

He quoted throughout his adress Kazakhstan’s most renowned poet and the father of its modern literature, Abai (1845-1904), whose writings reflect deep religious devotion and “the noble soul of this people.”

He recalled how Abai frequently addressed the ultimate questions about life and meaning to cultivate a spirituality, and quoting him, the Pope said this keeps “the soul alive and the mind clear,” and that people count on people of faith to be “examples of souls alive and minds clear” as well as reflecting “an authentic religiosity.”

The Pope recalled that fundamentalism “defiles and corrupts every creed” and that we must have “open and compassionate hearts.”

“The pursuit of transcendence and the sacred value of fraternity can inspire and illumine the decisions that need to be made amid the geopolitical, social, economic, ecological, but fundamentally spiritual crises that many modern institutions, including democracies, are presently experiencing, to the detriment of security and concord among peoples. We need religion, in order to respond to the thirst for world peace and the thirst for the infinite that dwells in the heart of each man and woman.” 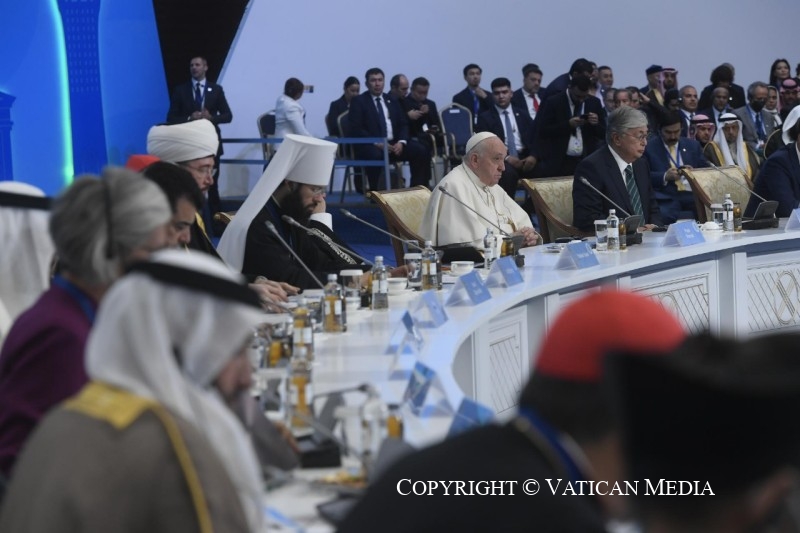 Pope Francis then noted the importance of religious freedom as “an essential condition for genuinely human and integral development.” Created free, every person “has the right to render public testimony to his or her own creed, proposing it without ever imposing it,” through proselytism or indoctrination.

Reflecting on the theme of this Congress looking at how to offer spiritual and social support in a post-pandemic world, the Pope focused on four challenges we all face and in special way urged religions to work together toward a greater unity of purpose.

The Covid-19 pandemic put everyone “in the same boat,” the Pope observed, adding how it exposed our common vulnerability and need for help.

He praised the “powerful sense of solidarity” that resulted from the pandemic but warned that we must not squander it. Here he said religions are “called to be present on the front lines, as promoters of unity amid the grave challenges that risk dividing our human family even further.”

“It is up to us, who believe in the Divine, to help our brothers and sisters at the present time not to forget our vulnerability…In a word, the sense of shared vulnerability that emerged during the pandemic should motivate us to move forward, not as we did before, but now with greater humility and foresight.” 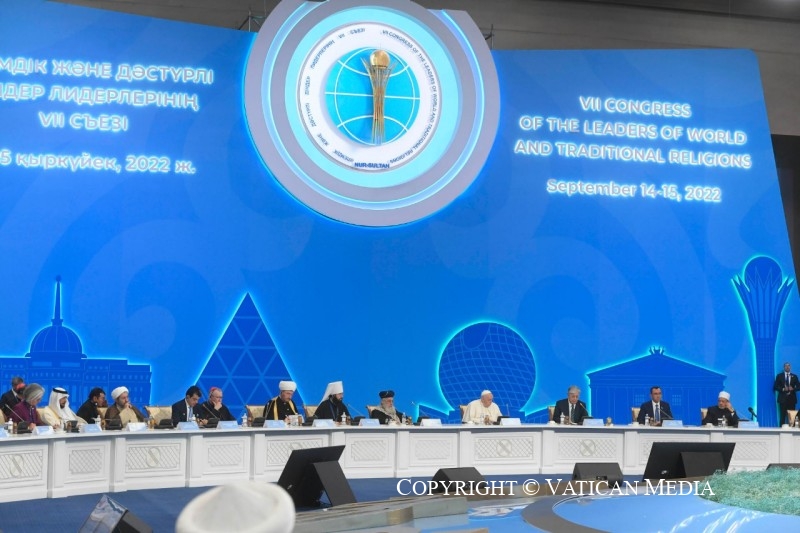 The Pope then added that believers are “called to care” for humanity and become “artisans of communion, witnesses of a cooperation that transcends the confines of our community, ethnic, national and religious affiliations.” He said we begin by listening to the poor, the neglected, the helpless show “suffer in silence and general disregard.”

“What I propose is not only a path to greater attentiveness and solidarity, but also a path to healing for our societies. For poverty is precisely what enables the spread of epidemics and other great evils that flourish on the terrain of poverty and inequality.”

The second global challenge the Pope highlighted is the challenge of peace.

Although discussed by religious leaders especially in recent decades, the scourage of war and confrontation still plagues the world, he observed. This requires a “leap forward” by the great religions to actively unite and commit to peace, the Pope said, if people of our day are to be inspired to engage in respectful and responsible dialogue.

“God is peace. He guides us always in the way of peace, never that of war. Let us commit ourselves, then, even more to insisting on the need for resolving conflicts not by the inconclusive means of power, with arms and threats, but by the only means blessed by heaven and worthy of man: encounter, dialogue and patient negotiations, which make progress especially when they take into consideration the young and future generations…Let us invest, I beg you, in this: not in more weapons, but in education!”

The third challenge facing us is “fraternal acceptance,” the Pope explained, noting how every day “children, born and unborn, migrants and elderly persons, are cast aside…yet every human being is sacred.”

It is especially the task of the religions to remind the world of this, the Pope said, recalling the massive exodus of people today caused by war, poverty and climate change. He said, “it is our duty to be mindful that the Creator, who watches over each of His creatures, exhorts us to regard others as He does, and in them to see the face of a brother or a sister.”

“Let us rediscover the art of hospitality, of acceptance, of compassion. And let us learn also to be ashamed: yes, to experience that healthy shame born of compassion for those who suffer, sympathy and concern for their condition and for their fate, which we realize that we too share. This is the path of compassion, which makes us better human beings and better believers.”

Care for our common home

The final challenge we all face is “care for our common home,” that we protect the natural environment from the damage we cause through pollution, exploitation, and devastation.

He noted how “the mindset of exploitation” is destroying our common home and leading to “an eclipse of the respectful and religious vision of the world willed by the Creator.”

In conclusion, Pope Francis encouraged everyone to “go forward together, so that the journey of the religions may be increasingly marked by friendship.”

“May the Almighty…enable us to cultivate open and fraternal friendships through frequent dialogue and luminous sincerity of purpose. May we never aim at artificial and conciliatory forms of syncretism, but firmly maintain our own identities, open to the courage of otherness and to fraternal encounter. Only in this way, in these dark times in which we live, will we be able to radiate the light of our Creator.”