You are here: Home1 / Kazakhstan Visit2 / Pope in Kazakhstan: ‘Never grow accustomed to war or weary of helping...

Pope in Kazakhstan: ‘Never grow accustomed to war or weary of helping its victims’

At the end of Mass in Nur-Sultan, Pope Francis prays for all the war-stricken areas in the world, including Ukraine, and calls for dialogue on the path towards peace, and for everyone to come to the aid of those who suffer.

Pope Francis presided at the celebration of the Holy Mass with the participation of the faithful at the Expo grounds in Nur-Sultan on Wednesday, the second day of his 3-day Apostolic Journey to Kazakhstan. 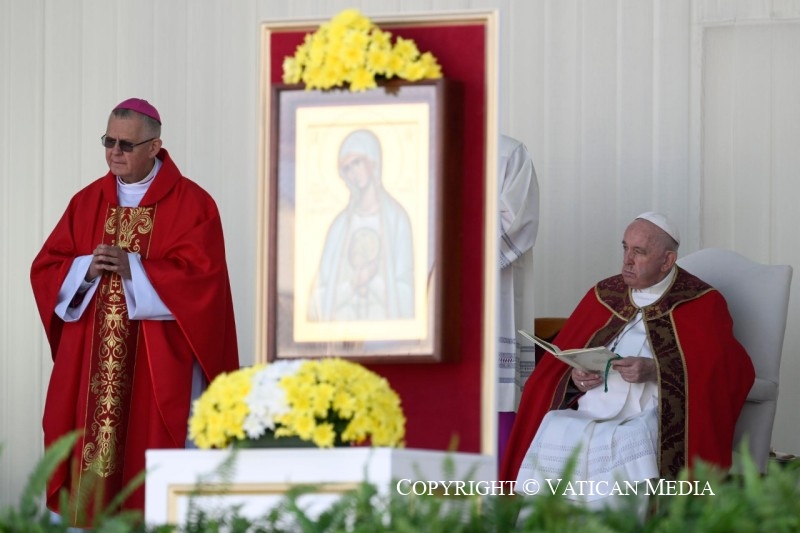 At the end of the Mass, the Pope addressed some words of gratitude, thanking Archbishop Tomas Peta of Maria Santissima in Astana for his speech. The Pope also acknowledged the efforts that went into the preparations for his visit, thanking also, the civil and religious authorities of the Central Asian nation, and all present.

“I greet all of you, brothers and sisters, and in particular those of you who have come from other countries of Central Asia and from the distant parts of this vast land,” the Pope said. “With great affection, I bless the elderly and the sick, the children and the young people.”

Gratitude becomes a plea for peace

Pope Francis highlighted the feeling of spiritual union to the National Sanctuary of the Queen of Peace in Oziornoje on the Feast of the Exaltation of the Holy Cross celebrated liturgically on 14 September.

He recalled that the words “Gratitude to the People of Kazakhstan” and “Peace to Mankind” are inscribed on the great cross at the National Sanctuary.

Inspired by those words, he said that “gratitude to the Lord for the holy people of God living in this great country, joined to gratitude for its commitment to promoting dialogue, becomes a plea for peace, the peace for which our world so deeply yearns.”

The Holy Father then turned his thoughts toward all the war-torn areas in the world, particularly Ukraine, praying that we never grow accustomed to war, or resigned to its perceived inevitability.

He urged everyone to come to the aid of those who suffer and to insist that genuine efforts be made to achieve peace, noting also that in these days, there have been reports of outbreaks of violence in the Caucasus region.

“The one solution is peace and the only way to arrive at peace is through dialogue,” the Pope stressed.

“What still needs to happen, and how many deaths will it still take, before conflict yields to dialogue for the good of people, nations and all humanity?”

Concluding, Pope Francis invited prayers from all so that the world may learn how to build peace, not least by limiting the arms race and converting the enormous amounts spent on war into concrete assistance for people.

“I thank all those who believe in this,” the Pope said. “I thank all of you, and all those men and women who are heralds of peace and unity!”