You are here: Home1 / Bahrain Vatican News2 / Pope in Bahrain: Prayer and fraternity are our modest but effective we...

Pope in Bahrain: Prayer and fraternity are our modest but effective weapons

Pope Francis encourages members of the Muslim Council of Elders in Bahrain to embrace fraternity, prayer and common efforts to help humanity rediscover the hidden sources of life, foster peace and promote care of the disadvantaged in society. 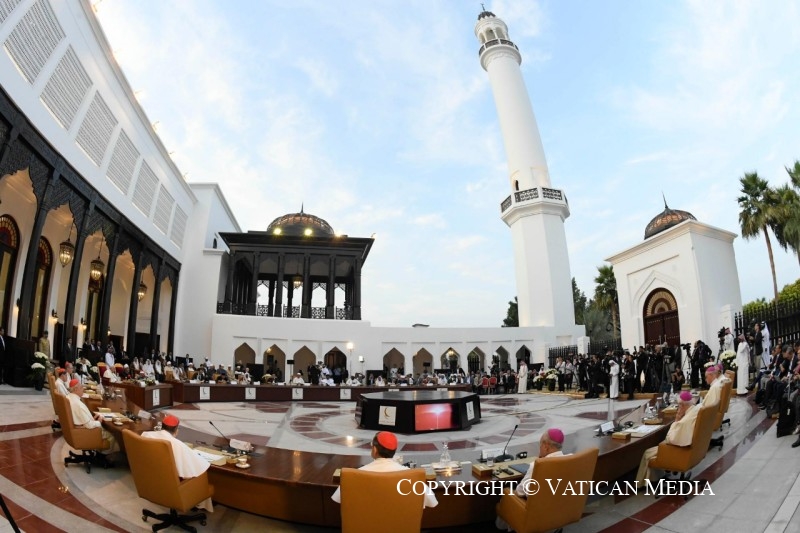 Pope Francis met with the members of the Muslim Council of Elders, in the presence of the Grand Imam of Al-Azhar, Sheikh Ahmad Al-Tayyeb in the mosque of the Sakhir Royal Palace on Friday afternoon.

Addressing the members, the Holy Father wished the peace of God upon them, who desire to foster reconciliation in order to avoid divisions and conflicts in Muslim communities, who see in extremism, a danger that corrodes genuine religion and who are committed to dispelling erroneous interpretations that do a disservice to religious belief.

“May peace come down and remain upon you: upon you, who wish to spread peace by instilling within people’s hearts the values of respect, tolerance and moderation; upon you, who seek to encourage friendly relations, mutual respect and trust with those who, like myself, are followers of a different religious tradition; upon you, who strive to provide young people with a moral and intellectual education that opposes all forms of hatred and intolerance.”

The Pope said that “God is the source of peace” and as such he “never brings about war, never incites hatred, never supports violence.” In fact, we, who believe in him are also called to “promote peace with tools of peace, such as encounter, patient negotiations and dialogue, which is the oxygen of peaceful coexistence.”

He upheld the spread of a culture of peace based on justice as one of the objectives of the Council and stressed that it is the only path, inasmuch as “peace is the effect of righteousness.”

“Peace is born of fraternity; it grows through the struggle against injustice and inequality; it is built by holding out a hand to others.”” 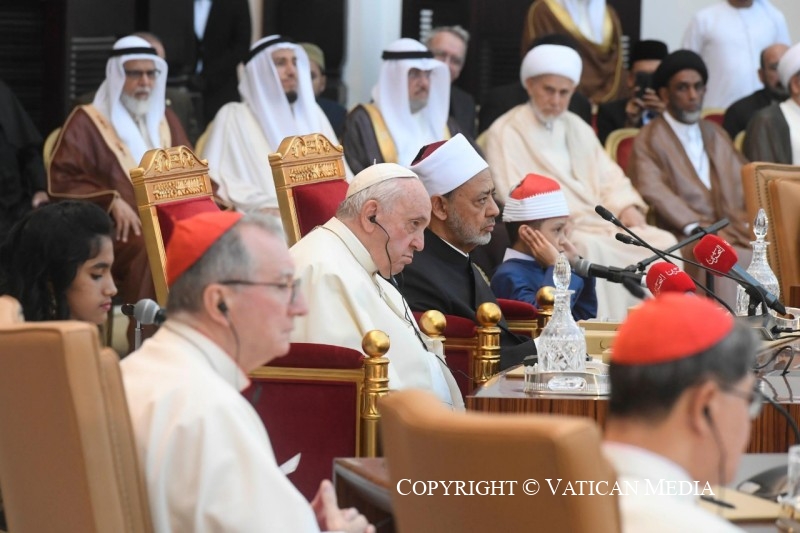 He insisted that peace cannot simply be proclaimed, but it must be helped to take root, and this is only possible by eliminating the forms of inequality and discrimination that give rise to instability and hostility.

Brother and pilgrim of peace

“I have come among you as a believer in God, as a brother and as a pilgrim of peace,” the Pope said. “I have come among you so that we can journey together, in the spirit of Francis of Assisi, who liked to say: “As you announce peace with your mouth, make sure that greater peace is in your hearts.”

The Pope noted that in these lands, it is customary to shake hands of guest and place one’s own hand on one’s chest as a sign of affection, as if to say, “you do not remain distant from me, but you enter into my heart, into my life”.

“I also place my hand on my heart with respect and affection, as I look out at each of you and bless the Most High for making it possible for us to encounter one another,” he said.

Pope Francis stressed that we need to encounter one another “to get to know and to esteem one another, to put reality ahead of ideas and people ahead of opinions, openness to heaven ahead of differences on earth.” He added that we “need to put a future of fraternity ahead of a past of antagonism, overcoming historical prejudices and misunderstandings in the name of the One who is the source of peace.”

He further urged everyone to be guided by the saying of Imam Ali: “People are of two types: they are either brothers and sisters in religion or fellow men and women in humanity,” and thus “forget the past and sincerely achieve mutual understanding, and, for the benefit of all, to preserve and promote peace, liberty, social justice and moral values.” 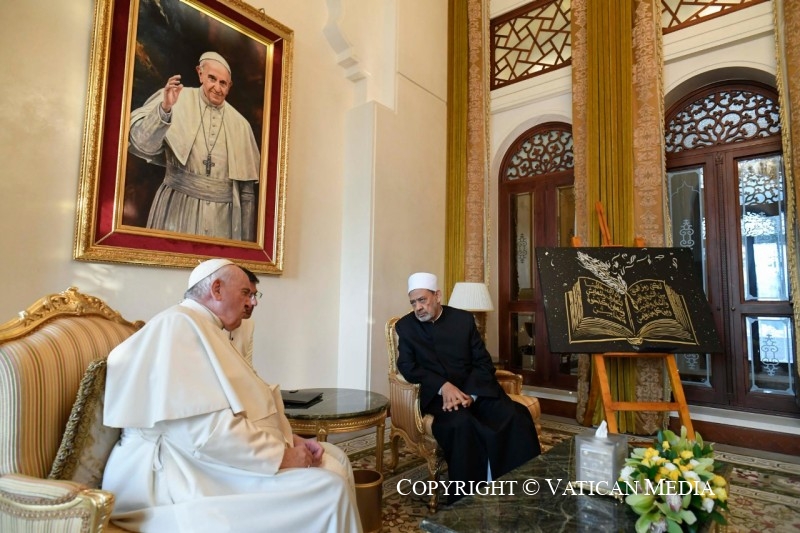 “These are duties incumbent upon us as religious leaders: in a world that is increasingly wounded and divided, that beneath the surface of globalization senses anxiety and fear, the great religious traditions must be the heart that unites the members of the body, the soul that gives hope and life to its highest aspirations.”

The power of life

Pope Francis upheld the power of life, which survives the driest deserts by “drawing upon the waters of encounter and peaceful coexistence.”

He recalled the “Tree of Life” found in Bahrain, noting that in the Bible, the tree of life is place in the original garden, at the heart of God’s plan for humanity. He added that human beings turned their backs on their creator and the order he established and that was the beginning of the problems and imbalanced that followed, including quarrels and murders between brothers (Gen 14), pride and social conflict (Gen 11), among others. All of this evil, the Pope said, is “rooted in the rejection of God and of our brothers and sisters, in our losing sight of the Author of life and no longer seeing ourselves as our brothers’ keepers.”

As a result, two questions remain valid whatever religious tradition a person may profess, and they two remain a challenge for every life and for every age: “Where are you?” (Gen 3:9); “Where is your brother?” (Gen 4:9).

The Pope further stressed that social, international, economic and individual evils, as well as the dramatic environmental crisis of our time, ultimately derive from estrangement from God and our neighbour.

“Ours, then, is a unique and inescapable duty: to help humanity to rediscover the forgotten sources of life, to lead men and women to drink from the wellsprings of ancient wisdom, and to bring the faithful closer to worship of the God of heaven and closer to our brothers and sisters for whom he created the earth.”

Pope Francis went on to recommend prayer and fraternity as our weapons, modest but effective, to achieve this duty of helping humanity rediscover the forgotten sources of life. He warned against other means and shortcuts unworthy of the Most high “whose name of Peace is dishonoured by those who put their trust in power and nurture violence, war and the arms trade, the “commerce of death” that, through ever increasing outlays, is turning our common home into one great arsenal.”

In this regard, the Pope thought of the people who are forced to migrate from their lands due to conflicts “subsidized by the purchase of outdated weapons at affordable prices, only to be then identified and turned away at other borders through increasingly sophisticated military equipment.”

Amid these tragic scenarios, he added, we are called to “proclaim, with the wisdom of our elders and fathers, that God and neighbour come before all else, that transcendence and fraternity alone will save us.”

“It is up to us to uncover these wellsprings of life; otherwise, the desert of humanity will be increasingly arid and deadly,” the Pope stressed, adding that are to “bear witness, more by our deeds than merely by our words.”

Our responsibility before God and humanity is great, he added, urging everyone to be exemplary models of what we preach, not only in our communities and homes, but in the world.

“We who are descended from Abraham, the father of peoples in faith, cannot be concerned merely with those who are “our own” but, as we grow more and more united, we must speak to the entire human community, to all who dwell on this earth.” 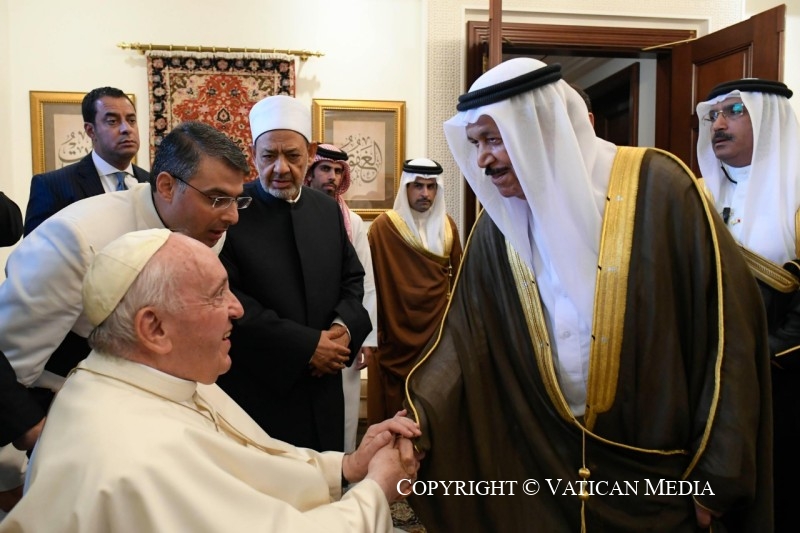 Pope Francis encouraged all men and women to ask “Who does it mean to be human? Why is there suffering, evil, death and injustice? What awaits us after this life? He noted that for some, immersed in a world of materialism and consumerism, these questions lie dormant, while for others, they are suppressed by the dehumanizing scourges of hunger and poverty.

“Let us support one another in this regard; let us follow up on our meeting today; let us journey together!” Pope Francis urged. “We will be blessed by the Most High and by the smallest and vulnerable creatures for whom he has a preferential love: the poor, children and the young, who after so many dark nights await the rising of a dawn of light and peace.”