You are here: Home1 / Latest News2 / Pope Francis present at interreligious “Cry for peace” at ...

Pope Francis present at interreligious “Cry for peace” at Colosseum

At the Community of Sant’Egidio’s ‘Cry for Peace’ at the Colosseum, Pope Francis reiterates that religions cannot be used for war, and calls for nations to defuse conflicts with the weapon of dialogue.

“Religions cannot be used for war. Only peace is holy, and no one is to use the name of God to bless terror and violence. If you see wars around you, do not resign yourselves! The peoples desire peace.”

This was the appeal of Pope Francis, along with religious leaders, during the closing ceremony of the annual ‘Spirit of Assisi’ prayer for peace on Tuesday afternoon at Rome’s iconic Colosseum. 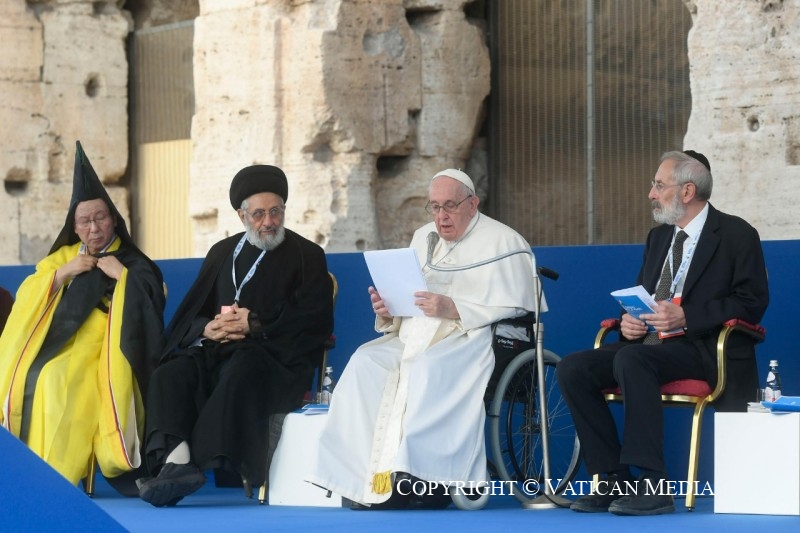 The Pope recalled that these words he and religious leaders declared together a year ago, gathered in the same place, and said the appeal we launched “is all the more timely today,” and “we must strive to do ever better each day.”

“Let us never grow resigned to war. Let us cultivate seeds of reconciliation.”

“Today let us raise to heaven our plea for peace,” the Pope said.

In the face of threats of nuclear weapons and anguished pleas, the Pope warned that war constitutes “a failure” and suggested it “summons everyone” to do everything, at every level, to stop it.

The three-day peace summit, held under the theme ‘Il Grido della Pace’ (The Cry for Peace), was hosted by the Community of Sant’Egidio, and has welcomed Heads of State, religious leaders, and various high-ranking authorities.

This year’s gathering marks the 36th edition of the meetings initiated in the wake of the historic World Day of Interreligious Prayer for Peace of 27 October 1986, convoked by Pope St. John Paul II.

The event in Rome was inaugurated Sunday at the “Nuvola” Congress Center in the Italian capital’s EUR business district, with the presence of French President Emmanuel Macron and Italian President Sergio Matterella.

Religious leaders from Christianity, Judaism, Islam, Buddhism, Sikhism, and Hinduism, came together and made an appeal for peace.

This marks the third-consecutive year Pope Francis has participated in the annual event.

While the Summits generally were held in different European cities, since the pandemic, they have been held in Rome, and with the Holy Father’s presence at each prayer gathering.

“In a special way, I thank the Christian leaders and those of other religions, who have joined us in the same spirit of fraternity that inspired the first historic convocation willed by Saint John Paul II in Assisi, thirty-six years ago.”

Heartfelt plea ‘where peace has been trampled upon’

“This year our prayer has become a heartfelt plea,” he said, “because today peace has been gravely violated, assaulted and trampled upon, and this in Europe, on the very continent that in the last century endured the horrors of two World Wars.”

Sadly, since then, the Pope lamented, wars have continued to cause bloodshed and to impoverish the earth.