In his concluding remarks at the 7th Congress of Leaders of World and Traditional Religions, Pope Francis urges all religions and societies to involve women and young people in the quest for world peace.

Concluding the 7th Congress of Leaders of World and Traditional Religions in Nur-Sultan, Kazakhstan, on his 38th Apostolic Journey abroad, Pope Francis thanked those present for coming from so many different parts of the world. 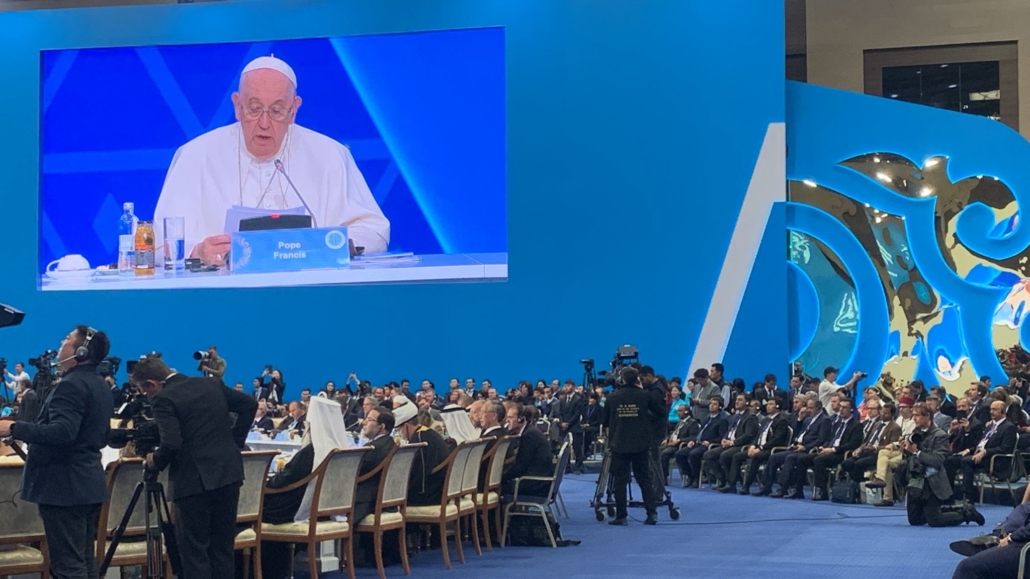 “We have travelled this road together,” he said. The Holy Father added that the members’ commitment in the service of dialogue over the course of the conference is more valuable than ever “when the problems of the pandemic have been compounded by the utter folly of war.”

Messengers of peace and unity

The Pope went on to recall his motto for the visit, “Messengers of Peace and Unity”, noting the deliberate decision to pluralise the word messengers.

“After the events of 11 September 2001, it was necessary to respond collectively to the incendiary atmosphere that terrorist violence sought to incite, and which threatened to turn religion into a grounds for conflict,” he said. “Pseudo-religious terrorism, extremism, radicalism and nationalism, dressed up in religious garb, nonetheless continue to foment fears and concerns about religion. In these days, then, it proved providential that we could come together once more, in order to reaffirm the authentic and inalienable essence of religion.”

Voice to those wanting to be heard

Kazakhstan, at the heart of the great and pivotal continent of Asia, was the natural place for us to meet, continued the Pope.

“There is a healthy connection between politics and transcendence, a sound form of coexistence that keeps their spheres distinct: distinct, but not confused or separate.”

Pope Francis stressed that “those who legitimately desire to voice their beliefs must be protected, always and everywhere.”

He added that, unfortunately, “many people are even now persecuted and discriminated against on account of their faith”, and instead “we must ensure that religious freedom will never be a mere abstraction but a concrete right.”

The Pope explained that it is for this reason that the Catholic Church also believes in the unity of the human family. The Church believes that all “humanity forms but one community” and “wishes to continue to do so, for the path of interreligious dialogue is a shared path to peace and for peace; as such, it is necessary and irrevocable.”

Pope Francis went on to emphasise three words in the Declaration of our Congress.

The first word is a synthesis of everything, the expression of a heartfelt plea, the dream and the goal of our journey: peace!

“Peace is urgently needed, because in our day every military conflict or hotspot of tension and confrontation will necessarily have a baneful ‘domino effect’ and seriously compromise the system of international relations.”

On the other hand, continued the Pope, peace “is more than the absence of war: it cannot be reduced to the maintenance of the balance of power between opposing forces nor does it arise out of despotic dominion but it is appropriately called ‘the effect of righteousness’.”

The Pope added that “our quest of peace must thus increasingly involve women”: the second word.

“Women bestow care and life upon the world: they are themselves a path towards peace.”

He also stressed the importance of entrusting women with greater positions and responsibilities, before introducing the third and final word: youth.

Pope Francis stressed that “young people are messengers of peace and unity, in the present and in the future.”

It is they who, more than anyone else, call for peace and respect for the common home of creation, he added.

“Let us put into the hands of the young opportunities for education, not weapons of destruction! And let us listen to them, without being afraid to be challenged by their questions.”

Concluding his discourse, Pope Francis asked all religious leaders at the Congress in Kazakhstan to “be open to tomorrow yet mindful of yesterday’s sufferings”, as we “press ahead on this path, walking together on earth as children of heaven, weavers of hope and artisans of concord, heralds of peace and unity.”