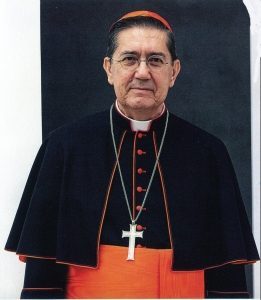 Cardinal Ayuso: ‘We must work for a culture of peace and inclusion’

Looking ahead to the first International Day of Human Fraternity, the President of the Pontifical Council for Interreligious Dialogue underscores the need for looking after those in need and expressed his hopes that the 2021 Zayed Award for Human Fraternity will be “a sign of fruitful collaboration between people of different faiths at the service of all humanity.”

On February 4th the International Day of Human Fraternity will be celebrated for the first time. The initiative promoted by the United Nations comes two years after the release in Abu Dhabi of the Document on Human Fraternity signed by Pope Francis and the Grand Imam of Al-Azhar, Ahmad Al-Tayyib. According to Cardinal Miguel Ángel Ayuso Guixot, President of the Pontifical Council for Interreligious Dialogue, this occasion must “rouse the desire to work for a culture of peace,” because when the crisis due to the COVID-19 pandemic ends, “we will be called to rebuild and increase outreach in favor of fraternity and solidarity.” For the Cardinal, the guidance offered by the Encyclical Fratelli tutti is key, since the text encourages us to take on “responsibilities, both individual and collective, in the face of new trends and needs on the international scene.”

Last year on December 21, the General Assembly of the United Nations, during its 75th plenary session, established that February 4 of each year be dedicated as an International Day of Human Fraternity. The UN statement reads that by adopting this resolution, the Assembly invites member states to celebrate this day “to promote interreligious and intercultural dialogue.” The text of the resolution also expresses the hope that “a global response based on unity, solidarity and renewed multilateral cooperation” will be sought as the world faces the unprecedented crisis caused by the Coronavirus pandemic. With the awareness that on our own we cannot save ourselves, the resolution calls on making every effort so that interreligious and intercultural dialogue are promoted, as advocated in the Document on Human Fraternity for World Peace and Living Together signed in 2019 in Abu Dhabi by Pope Francis and the Grand Imam of Al-Azhar, Ahmad Al-Tayyib. It is precisely to commemorate the signing of the Document that the UN chose the date of February 4.

With the view of the good of all humanity, it is hoped that the February 4 occurrence will rouse the desire to work for a culture of peace that supports the efforts of all those – including the international community and followers of various religious traditions – who are committed to tolerance, inclusion, understanding and solidarity, especially during these times tragically marked by the pandemic. When this crisis ends, we will be called to rebuild and increase outreach in favor of fraternity, solidarity and peace. Coming out of this pandemic we will have to be reborn again, better than we were before. And not only at a personal level.

Q: Several times, echoing the Pope’s words, he said that our lives, the lives of our communities, cannot be separated from the lives of others. We depend on one another. What role do religions play?

R: They play a key role. We all know that from the very beginning of his pontificate, Pope Francis has emphasized the importance of relations between followers of various religions, stressing the importance of friendship and respect. Believers of different religious traditions, walking together on the path of interreligious dialogue, can genuinely offer their contribution to universal fraternity in the societies in which they live. Indeed, believers are witnesses and bearers of values that can greatly contribute to building more just and healthy societies. Righteousness, fidelity, love for the common good, concern for others, especially those in need, benevolence and mercy are weapons that are part of the spiritual arsenals of the various religions. It is a matter of taking concrete steps together with believers of other religions and people of goodwill. The hope is that we will all feel called to be messengers of peace and builders of communion, and to proclaim that today is the moment for fraternity particularly in these times, as opposed to those who foster clashes, divisions and closure.

Q: Who does not recall the words of the Holy Father on the evening of March 27, 2020? “We have realized that we are on the same boat, all of us fragile and disoriented, but at the same time important and needed, all of us called to row together, each of us in need of comforting the other.” Pope Francis summed up with these words the sense of bewilderment that has plagued Christians and other believers since the pandemic began, but he also urged everyone to ‘row together.’

R: God is the Creator of everything and everyone, so we are members of a single family and we must recognize ourselves as such. This is the fundamental criterion that faith offers us to move from mere tolerance to fraternal coexistence, to interpret the differences that exist among us, to defuse violence and to live as brothers and sisters.

Q: Last October Pope Francis published the encyclical dedicated to Fraternity and Social Friendship. How is this document signed in Assisi linked to the International Day we are about to celebrate?

R: The Encyclical Fratelli tutti is a concrete invitation to fraternity and social friendship that concerns every man and woman, believer or non-believer. Reading the Encyclical, we feel a call to responsibility, both individual and collective, in the face of new trends and demands on the international scene. As I said earlier, the International Day we are about to celebrate is the fruit of what is hoped for in the Document on Human Fraternity to which Pope Francis made ample reference in drafting the Encyclical. The direct link is evident between the latter and an international initiative, such as that of the United Nations, aimed at promoting a message of fraternity. Pope Francis exhorts us in Fratelli tutti to build a fraternal society that promotes education for dialogue to defeat the virus of “radical individualism” (no. 105) and to allow everyone to give the best of themselves while also emphasizing that the right to live with dignity cannot be denied to anyone. Since rights are without borders, no one can remain excluded, regardless of where he or she was born (see no. 121). And it is precisely human fraternity that will allow each person to make this dehumanized world, in which the culture of indifference and greed characterize relationships between human beings, capable of living a new and universal solidarity. It is genuinely good then that, at least once a year, we remember that we are all brothers and sisters!

Q: You are the Chairman of the Higher Committee for Human Fraternity that was established in August two years ago. In what areas are you working?

R: I would like to clarify that I am not currently the Chairman of the Higher Committee for Human Fraternity, which was established in August 2019, and charged with implementing the content of the Document on Human Fraternity for World Peace and Living Together. In fact, it was decided at its founding that there would be a rotation between the Holy See and Al-Azhar. I had the honor of chairing the Committee the first year. Today the Higher Committee is composed of religious leaders, scholars, and cultural figures from around the globe with ties to the Christian, Jewish and Muslim world inspired by the Document and dedicated to promoting its ideals of peace and mutual respect. Various initiatives are being worked on in this direction and have been promoted. For the sake of brevity, I will mention two in particular. Related to the International Day of Human Fraternity, it was on December 4, 2019, that the members of the Committee met in New York with the Secretary-General of the United Nations, Dr. António Guterres, to deliver a message to him from Pope Francis and the Grand Imam of Al-Azhar Ahmed Al-Tayyeb, in which it was proposed precisely that February 4 be declared the International Day of Human Fraternity. Another initiative promoted for the benefit of all humanity was that of a day of prayer, fasting and invocation to God the Creator be held to remember all those affected by the pandemic. Believers of all religions and people of goodwill were invited to join spiritually and it took place on May 14, 2020.

Q: The 2021 Zayed Award for Human Fraternity will be presented on February 4th, an award inspired by the Document on Human Fraternity signed in Abu Dhabi by the Pope and the Grand Imam al-Tayeb. What is the significance of this award and is it being given for the first time?

R: The Zayed Award for Human Fraternity created in 2019 is a tribute to Sheikh Zayed bin Sultan al Nahyan, founder of the United Arab Emirates. It was first awarded in an honorary way to Pope Francis and the Grand Imam of Al-Azhar, Ahmad al-Tayyeb for the signing in Abu Dhabi of the Document on Human Fraternity in 2019. Subsequently, the award was opened to nominations taken into consideration individuals or organizations deeply committed to initiatives that bring people together and promote peaceful coexistence. It is intended to be an initiative that strengthens human relations, promotes the building of bridges of dialogue and enhancing understanding and cooperation among nations. The hope is that the awarding of this prize may also be a sign of the fruitful collaboration between men and women of different religions in the service of all humanity.

An ad hoc jury was created to award this prize on February 4th of each year.

(This is a working translation of the Italian original.)