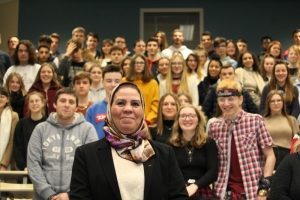 By Vatican News staff writer
During a virtual ceremony commemorating the first-ever International Day for Human Fraternity on Thursday, Pope Francis and the Grand Imam of Al-Azhar, Ahmad Al-Tayyeb, highlight the importance of fraternity and solidarity. UN Secretary-General Antonio Guterres and Moroccan-French activist Latifah Ibn Ziaten were also presented with the 2021 Zayed Award for Human Fraternity.

The first-ever International Day of Human Fraternity, commemorated on Thursday, was marked with a virtual event which saw the participation of Pope Francis and several other personalities, including Sheikh Mohammed bin Zayed of Abu Dhabi – the host of the online event – the Grand Imam of Al-Azhar, Ahmad Al-Tayyeb, UN Secretary-General António Guterres, and other personalities.

One part of the celebration was the presentation of the 2021 Zayed Award for Human Fraternity to UN Secretary-General Antonio Guterres and Moroccan-French activist and founder of the Imad Association for Youth and Peace, Latifah Ibn Ziaten.

Inspired by the signing of the Document on Human Fraternity, the Zayed Award for Human Fraternity recognizes individuals who are committed to fostering conditions for peaceful co-existence.

A celebration of peace and fraternity

He urged young people to dream, to have hope, and to “think about the future with a smile.” He added that we are before the historic Zayed award, to which we all belong and which belongs to us.

Speaking on fraternity and the importance of the Abu Dhabi document, Archbishop Justin Welby of Canterbury, primate of the Anglican Communion, said it is “an inspiring document that points to what we can do together and calls us to act in solidarity for one another.” He added that “it is friendship that matters in changing what we do”, and prayed that we may develop such friendships so that we may work together.

Addressing both Pope Francis and the Grand Imam, Judge Abdel Salam said the Higher Committee has followed their efforts of service to humanity which inspire hope. He expressed happiness as the world celebrates the first-ever International Day of Human Fraternity.

“Your voice that always speaks the truth brings hope to all people,” he said. “At the same time, it encourages millions around the world to walk the same path. In this regard, those voices are highlighted and their owners appreciated through this global initiative represented by the Zayed Award for Human Fraternity.”

4 February: an alarm bell for the world

The Grand Imam, Ahmad Al-Tayyeb, highlighted that the Document on Human Fraternity calls for cooperation, an end to wars and the promotion of tolerance and harmony.

He expressed hope that the annual celebration of this International Day would be “an alarm bell for the world and its leaders,” urging them to “entrench the principles of human fraternity.”

The Grand Imam went on to reaffirm his resolve to continue working for peace, alongside other proponents for peace, noting that for the Document on Human Fraternity to become lived reality we need determination and the firm belief that “people are all brothers who have the right to live in peace” in spite of the diversity between them.

Fraternity: a new frontier for humanity

Working for unity despite challenges

In his acceptance speech, Zayed award recipient and UN Secretary-General, António Guterres, expressed his gratitude, seeing it also as a recognition of the work of the UN in promoting peace and human dignity in the world.

He highlighted that despite the challenges of the times, including the ongoing pandemic, climate change and other threats from war and conflict, racism, violent extremism and discrimination, the leadership of the Pope and the Grand Imam continue to push humankind to come together in unity, in dialogue, to promote peace and fraternity.

We must break barriers of hatred

The second 2021 Zayed Award honoree – civil society activist and founder of the Imad Association for Youth and Peace – Latifah Ibn Ziaten also expressed her gratitude for the award.

She noted that the recognition would be of great help in her work of reaching out to many children, protecting them from “falling into hatred.” She added that even though she lost her son, and she carries a deep wound that will never be healed, she is now “a second mother” to so many other children.

“As I say to every child,” she added, “if we can break the barriers in our hearts, we’ll find our place in society and we’ll all be brothers. But we must really break these barriers.”

Download the Document on Human Fraternity for World Peace and Living Together under the menu item “Resources”.