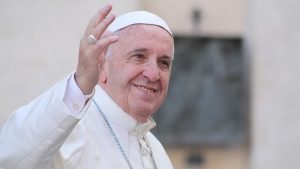 1. “FRATELLI TUTTI”. With these words, Saint Francis of Assisi addressed his brothers and sisters and proposed to them a way of life marked by the flavour of the Gospel. Of the counsels Francis offered, I would like to select the one in which he calls for a love that transcends the barriers of geography and distance, and declares blessed all those who love their brother “as much when he is far away from him as when he is with him”.[2] In his simple and direct way, Saint Francis expressed the essence of a fraternal openness that allows us to acknowledge, appreciate and love each person, regardless of physical proximity, regardless of where he or she was born or lives.

2. This saint of fraternal love, simplicity and joy, who inspired me to write the Encyclical  Laudato Si’, prompts me once more to devote this new Encyclical to fraternity and social friendship. Francis felt himself a brother to the sun, the sea and the wind, yet he knew that he was even closer to those of his own flesh. Wherever he went, he sowed seeds of peace and walked alongside the poor, the abandoned, the infirm and the outcast, the least of his brothers and sisters.

3. There is an episode in the life of Saint Francis that shows his openness of heart, which knew no bounds and transcended differences of origin, nationality, colour or religion. It was his visit to Sultan Malik-el-Kamil, in Egypt, which entailed considerable hardship, given Francis’ poverty, his scarce resources, the great distances to be traveled and their differences of language, culture and religion. That journey, undertaken at the time of the Crusades, further demonstrated the breadth and grandeur of his love, which sought to embrace everyone. Francis’ fidelity to his Lord was commensurate with his love for his brothers and sisters. Unconcerned for the hardships and dangers involved, Francis went to meet the Sultan with the same attitude that he instilled in his disciples: if they found themselves “among the Saracens and other nonbelievers”, without renouncing their own identity they were not to “engage in arguments or disputes, but to be subject to every human creature for God’s sake”. In the context of the times, this was an extraordinary recommendation. We are impressed that some eight hundred years ago Saint Francis urged that all forms of hostility or conflict be avoided and that a humble and fraternal “subjection” be shown to those who did not share his faith.

4. Francis did not wage a war of words aimed at imposing doctrines; he simply spread the love of God. He understood that “God is love and those who abide in love abide in God” (1 Jn 4:16). In this way, he became a father to all and inspired the vision of a fraternal society. Indeed, “only the man who approaches others, not to draw them into his own life, but to help them become ever more fully themselves, can truly be called a father”.[4] In the world of that time, bristling with watchtowers and defensive walls, cities were a theatre of brutal wars between powerful families, even as poverty was spreading through the countryside. Yet there Francis was able to welcome true peace into his heart and free himself of the desire to wield power over others. He became one of the poor and sought to live in harmony with all. Francis has inspired these pages.

5. Issues of human fraternity and social friendship have always been a concern of mine. In recent years, I have spoken of them repeatedly and in different settings. In this Encyclical, I have sought to bring together many of those statements and to situate them in a broader context of reflection. In the preparation of  Laudato Si’, I had a source of inspiration in my brother Bartholomew, the Orthodox Patriarch, who has spoken forcefully of our need to care for creation. In this case, I have felt particularly encouraged by the Grand Imam Ahmad Al-Tayyeb, with whom I met in Abu Dhabi, where we declared that “God has created all human beings equal in rights, duties and dignity, and has called them to live together as brothers and sisters”.[5] This was no mere diplomatic gesture, but a reflection born of dialogue and common commitment. The present Encyclical takes up and develops some of the great themes raised in the Document that we both signed. I have also incorporated, along with my own thoughts, a number of letters, documents and considerations that I have received from many individuals and groups throughout the world.

6. The following pages do not claim to offer a complete teaching on fraternal love, but rather to consider its universal scope, its openness to every man and woman. I offer this social Encyclical as a modest contribution to continued reflection, in the hope that in the face of present-day attempts to eliminate or ignore others, we may prove capable of responding with a new vision of fraternity and social friendship that will not remain at the level of words. Although I have written it from the Christian convictions that inspire and sustain me, I have sought to make this reflection an invitation to dialogue among all people of good will…

Download the full text in pdf in the above links.

Link to other languages here.