You are here: Home1 / Latest News2 / At Plenary address, Pope encourages dialogue as alternative to conflic... 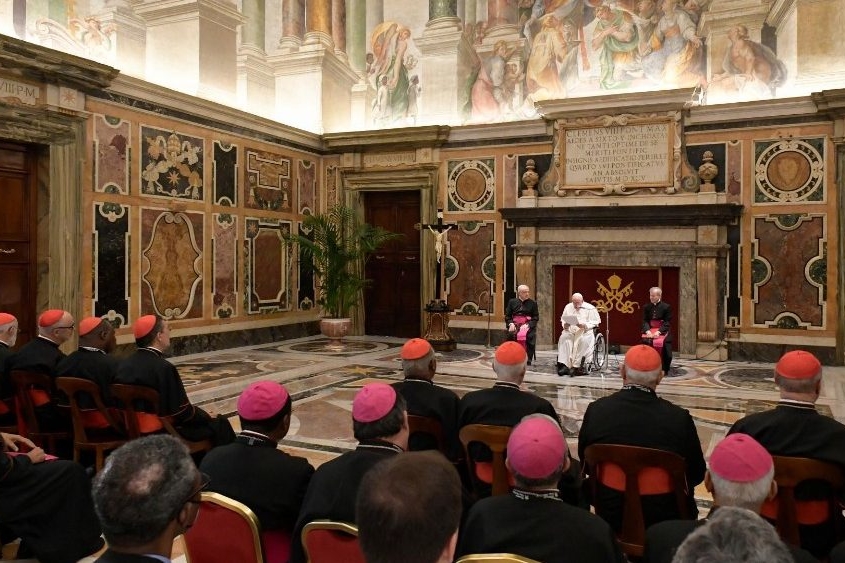 Pope: Dialogue is the alternative to fragmentation and conflict

Pope Francis addresses members of the Dicastery for Interreligious Dialogue on the occasion of their Plenary Assembly, noting that interreligious dialogue is crucial in a world torn by conflict.

Pope Francis’s speech to members of the Dicastery for Interreligious Dialogue on Monday provided him with the occasion to reiterate his appeal for dialogue, based on the acceptance of diversity and respect for the other, as the only alternative to the fragmentation and conflict we experience in the world today.

His words came in the wake of his urgent plea on Pentecost Sunday to government leaders to step back and avoid leading humanity to ruin.

In his speech to the Dicastery and to its President, Cardinal Miguel Ángel Ayuso Guixot, which is holding its Plenary Assembly, the Pope recalled that the institution was established by Pope St Paul VI – as the “Secretariat for Non-Christians” in his Pentecost homily in 1964, during the Second Vatican Council.

His intuition, the Pope said, “was based on an awareness of the exponential development of relations between people and communities of different cultures, languages and religions – an aspect of what we now call globalization.”

The forward-looking Saint placed the Secretariat “in the Church as a visible and institutional sign of dialogue” with people of other religions, Pope Francis noted, quoting from a 1968 speech by Paul VI to the Members and Consultors of the Secretariat.

The Holy Father also rooted his words in the present, highlighting the fact that the new Apostolic Constitution, Praedicate Evangelium, on the Roman Curia, has just come into force, and this area of its service to the Church and the world has lost none of its relevance.

“Globalization and the acceleration of international communications make dialogue in general, and interreligious dialogue in particular a crucial issue.”

He upheld the theme of the Plenary – “Interreligious Dialogue and Conviviality” – which he said is fitting at a time when the whole Church wants to grow in synodality, to grow as a “Church of mutual listening in which everyone has something to learn”.

Pope Francis decried the fact that “our increasingly interconnected world is not as fraternal and convivial. Far from it!”

In this context, he reminded members of the Dicastery that interreligious dialogue must be realized through action, theological exchange and spiritual experience in order to promote among all people “a true search for God.”

“This is your mission: to promote with other believers, in a fraternal and convivial way, the path of seeking God; considering people of other religions not abstractly, but concretely, with a history, desires, wounds, dreams,” he said.

“Only in this way can we build together a habitable world for all, in peace.”

Reflecting on the succession of crises and conflicts we witness, he noted that, “some try to flee from reality by taking refuge in private worlds, others confront it with destructive violence, but between selfish indifference and violent protest there is one option that is always possible: dialogue.”

The Pope described humanity as an immense mosaic, “which is already beautiful in itself, but only together with the other tiles composes an image, in the conviviality of differences.”

This he said, means being able to imagine and build a happy future with the other.

“Conviviality echoes the desire for communion that dwells in the heart of every human being, thanks to which everyone can talk to each other, projects can be exchanged, and a future together can be outlined,” he said.

He explained that conviviality unites socially, but warned against the colonization of the other, and the preservation of every, diverse identity.

“In this sense, [conviviality] has political relevance as an alternative to social fragmentation and conflict.”

Conviviality with people of other religions

Pope Francis concluded encouraging those present “to cultivate the spirit and style of conviviality in your relationships with people of other religious traditions: “we need it so much today in the Church and in the world!”

“Let us remember,” he said, “that the Lord Jesus fraternized with everyone, that He hung out with people considered sinful and unclean, that He shared the table of the publicans without prejudice. And always during a convivial meal. He showed Himself as the faithful servant and friend to the end, and then as the Risen One, the Living One who gives us the grace of universal conviviality.”