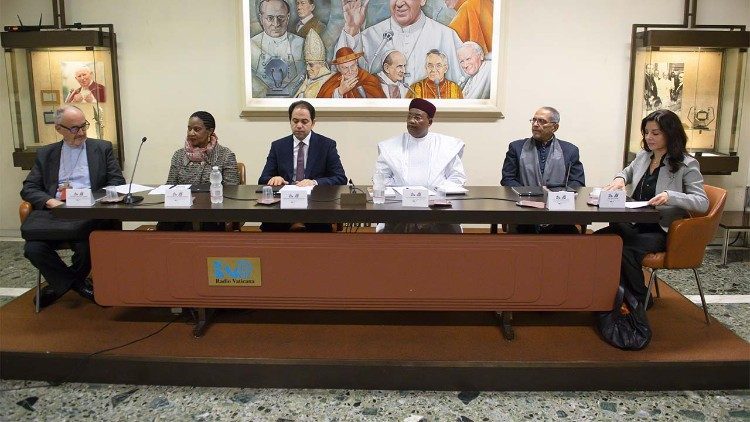 Zayed Human Fraternity Award: ‘A call to action to resist spread of hatred’

The headquarters of Vatican News hosted a press conference on Friday featuring the jury committee members who will pick this year’s winner of the Zayed Award for Human Fraternity.

The prize seeks to recognize individuals and organizations which have made profound contributions to human progress, as well as facilitating peaceful coexistence on the basis of our common humanity.

Step along path of fraternity

Cardinal Michael Czerny, SJ, kicked off Friday’s press conference noting that the Document on Human Fraternity is an important “step” along the path of peace among peoples, rather than “an achievement”.

The Cardinal said the Document’s long-term effects will depend on its reception “by believers”. He added that every person on earth is a believer, and that it is a false distinction to call some people believers and others “non-believers”.

“There is no such thing as a human ‘non-believer’,” said Cardinal Czerny. “So, it depends on all people of all beliefs—of all convictions, of all commitments—to realize the meaning and the potential of the Document and to put it into practice.”

The former president of Niger, Mahamadou Issoufou, said the Document is historic in uniting people of the three great “Abrahamic faiths”—Judaism, Christianity, and Islam—in a common desire to seek the values of fraternity, solidarity, peace, tolerance, and liberty.

The Zayed Award, he added, offers the opportunity to explore the values contained in the Document, as well as the direction the world is heading.

Overcoming the ‘virus of hate’

Dr. Leah Pisar, chair of Project Aladdin which works to counter violence and bigotry, tied the occasion to the ongoing Covid-19 pandemic.

She said the pandemic has generated a “virus of hate” amongst peoples, a hatred which she said the value of human fraternity can help counteract.

In an interview with Vatican News on the sidelines of the press conference, Dr. Pisar spoke briefly about her experience of human fraternity, reiterating her concern about the direction humanity is headed.

She offered her father’s painful experience of the Holocaust as an example. Samuel Pisar spent four years in the Nazi death camps at Dachau and Auschwitz, among others, was the only survivor of his Polish school of 900 children, and endured the murder of every other family member.

“Yet, he emerged from all of this with hope, with hopefulness,” according to his daughter, “and with the belief that there are no hereditary enemies.”

Dr. Pisar added that her father overcame the temptation to hate, teaching many people during his long career as a lawyer in the US that humanity must learn to live with one another.

“We must, must, must remain vigilant, so that such horrors don’t happen again,” urged Dr. Pisar. “And when I look at the world today, I worry that bad things are happening, that humans are turning against other humans, that there is hatred, that there is violence.”

But, concluded Dr. Pisar, human fraternity—and the Document and Award dedicated to this value—are a real “call to action to resist that, and to put forth this message of fraternity and common humanity.”

As the press conference continued, José Ramos Horta, the former president of East Timor, said the Document on Human Fraternity is “extraordinary” in its ability to bring together values which are universal in the history of human thought.

He added that the two signatories—Pope Francis and the Grand Imam of Al-Azhar, Ahmad Al-Tayyeb—are reputable religious leaders and that their personal examples of openness have the power to unite billions of people across Islam and Christianity.

Judge Mohamed Abdelsalam, the Secretary-General of the Higher Committee of Human Fraternity, praised the two leaders and signatories of the Document, as well as the document’s main promoter, Sheikh Zayed bin Sultan Al Nahyan of Abu Dhabi.

“The Document on Human Fraternity comes in a very historic moment of sharing and breaking bread” between the two leaders, he said. “And in this Document they have presented to the whole world a message that calls for a culture of sharing, a culture of peace, a culture of solidarity.”

Participants in the press conference then turned to the question of what qualities the jury is looking for in the person who will win the Zayed Award for Human Fraternity.

They held up such traits as “an example for rest of humanity” and “a person who feels strongly about the search for human fraternity so as to take institutional steps to contribute toward the cause.”

Cardinal Czerny noted particularly that every person is capable of working toward human fraternity. He added that he is looking for someone who would not usually be considered for prizes, especially from among the poor who seek to promote the value of fraternity in their daily lives.

Appeal for everyone to be a bridge

Ms. Phumzile Mlambo-Ngcuka, the UN Under-Secretary General, then launched an appeal for all people—of whatever faith tradition or creed—to promote the value of human fraternity in their daily lives, a trait the Zayed Award is meant to showcase.

“Be a bridge,” urged the former Deputy President of South Africa. “Do whatever you can to bring people together to overcome the gap between us. No one is a big hero if we are not all heroes. We are all in this together.”